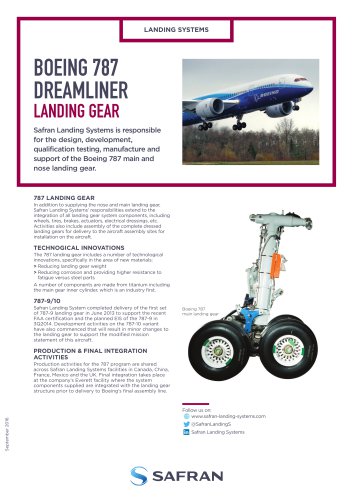 BOEING 787 DREAMLINER LANDING GEAR Safran Landing Systems is responsible for the design, development, qualification testing, manufacture and support of the Boeing 787 main and nose landing gear. 787 LANDING GEAR In addition to supplying the nose and main landing gear, Safran Landing Systems’ responsibilities extend to the integration of all landing gear system components, including wheels, tires, brakes, actuators, electrical dressings, etc. Activities also include assembly of the complete dressed landing gears for delivery to the aircraft assembly sites for installation on the aircraft. TECHNOGICAL INNOVATIONS The 787 landing gear includes a number of technological innovations, specifically in the area of new materials: > Reducing landing gear weight > Reducing corrosion and providing higher resistance to fatigue versus steel parts A number of components are made from titanium including the main gear inner cylinder, which is an industry first. 787-9/10 Safran Landing System completed delivery of the first set of 787-9 landing gear in June 2013 to support the recent FAA certification and the planned EIS of the 787-9 in 3Q2014. Development activities on the 787-10 variant have also commenced that will result in minor changes to the landing gear to support the modified mission statement of this aircraft. PRODUCTION & FINAL INTEGRATION ACTIVITIES Production activities for the 787 program are shared across Safran Landing Systems facilities in Canada, China, France, Mexico and the UK. Final integration takes place at the company’s Everett facility where the system components supplied are integrated with the landing gear structure prior to delivery to Boeing’s final assembly line. Follow us on: © www.safran-landing-systems.com @SafranLandingS 03 Safran Landing Systems