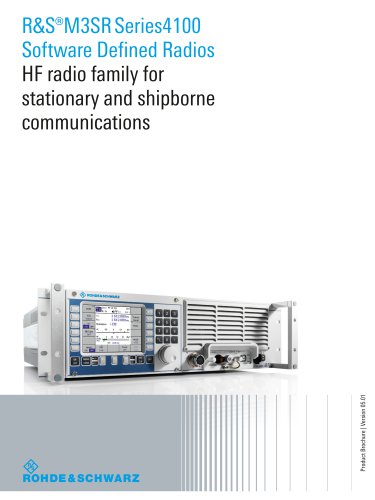 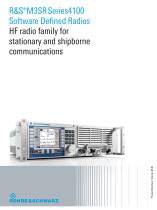 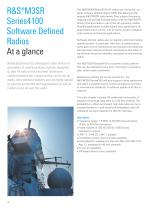 R&S®M3SR Series4100 Software Defined Radios At a glance Rohde & Schwarz has developed a state-of-the-art generation of communications systems designed to take HF adio to the next level. Shortwave r communications are a resource that can be set up easily, offer extreme eliability and are highly valued r by security authorities and organizations as well as military users all over the world. The R&S®M3SR  eries4100 HF radios are innovative, verS satile software defined radios (SDR) that belong to the popular R&S®M3SR radio family. They support frequency hopping and provide interoperability... 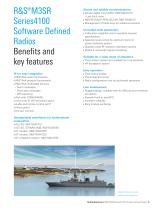 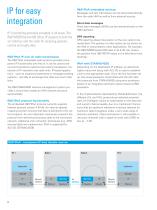 R&S®IPoA embedded services Messages and text information can be transmitted irectly d from the radio HMI as well as from external sources. IP is becoming generally accepted in all areas. The R&S®M3SR Series4100 offers IP support at both the air interface and the radio for receiving payload, control and audio data. R&S®IPoA IP over air radio transmission The R&S®IPoA embedded radio protocol provides transparent IP functionality over the air. It can be used to set up communications systems that require transparent connection of IP networks over radio links. IP-based applications – such as... 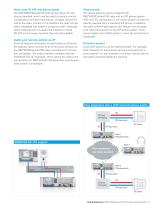 Voice over IP, SIP and phone patch Phone patch The R&S®M3SR Series4100 radio family has an IP interface as standard, which can be used for remote control, configuration and also transmission of digital voice from and to the radio. Thanks to this interface the radio can be easily integrated into systems using one cable. Although other interfaces such as audio line interface or serial RS-232 are no longer required, they are still available. The phone patch is used to integrate the R&S®M3SR Series4100 radio into an SIP phone system. With ALE-3G, participants in the radio network can also be... 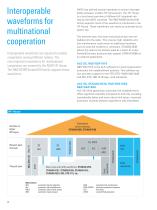 Interoperable waveforms for multinational cooperation NATO has defined several standards to ensure interoperability between modern HF transceivers. The HF House is a structured overview of different HF standards ratified by the NATO countries. The R&S®M3SR Series4100 family supports most of the waveforms mentioned in the HF House. These waveforms can easily be activated by an o ption key. Interoperable waveforms are required to enable cooperation among different nations. The most important waveforms for multinational cooperation are covered by the NATO HF House. The R&S®M3SR Series4100... 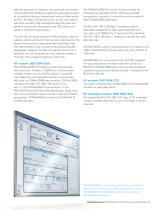 data link protocols. In addition, the automatic link maintenance (ALM) functionality is supported, allowing channels to be switched during a transmission without interrupting the link. The layer 2 protocols known as LDL (low-latency data link) and HDL (high-throughput data link) have the benefit of improved robustness at low S/N values compared to conventional protocols. The ALE-3G xDL protocols permit ARQ-secured, channeladaptive data transmission that has been optimized for the special characteristics associated with shortwave channels. Mechanisms such as code combining and packet... 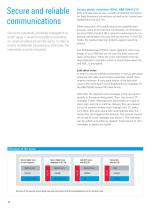 Secure and reliable communications Due to the potentially worldwide propagation of an HF signal, it would be possible to eavesdrop on communications all over the world. In order to protect confidential transmissions effectively, the information must be encrypted. Secure digital voice/data (SDV), R&S®GM4121S SDV provides easy-to-use, versatile embedded encryption for fixed frequency connections as well as for connections established with ALE-3G. When using ALE-3G’s synchronous link establishment process, users profit from the combination of information security (SDV) and ALE-3G’s inherent... 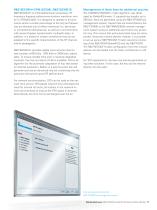 Management of black keys for additional security R&S®SECOM-H is a Rohde & Schwarz proprietary HF f requency hopping radiocommunications waveform similar to STANAG 4444. It is designed to operate in environments where a certain percentage of the hop set frequencies are blocked due to either intentional (i.e. jamming) or unintentional disturbances, as well as in environments with severe Doppler spread and/or multipath delay. In addition, it is based on modem waveforms that can be adapted to the specific characteristics of the HF channel and its propagation. The COMSEC/TRANSEC crypto algorithm... 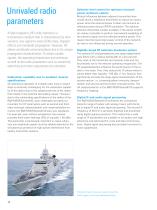 Unrivaled radio parameters A high frequency (HF) radio channel is a transmission medium that is characterized by time variance, low signal-to-noise (S/N) ratios, Doppler effects and multipath propagation. However, HF allows worldwide communications due to its unique propagation characteristics. To obtain usable signals, the operating frequencies and antennas as well as the radio parameters such as sensitivity, selectivity and noise suppression are essential. Collocation capability due to excellent receiver specifications Simultaneous operation of multiple radio lines on board ships is...

Open the catalog to page 12 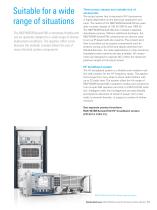 Suitable for a wide range of situations The R&S®M3SR Series4100 is extremely flexible and can be optimally adapted to a wide range of diverse deployment conditions. The logistics effort is low because the modular concept allows the use of many identical system components. Three power classes and suitable line of accessories The output power that is required of HF transceivers is highly dependent on the particular application scenario. The radios of the R&S®M3SR  eries4100 are availS able in power classes of 150 W, 500 W and 1000 W. The R&S®M3SR  eries4100 also includes a separate, S...

Open the catalog to page 13