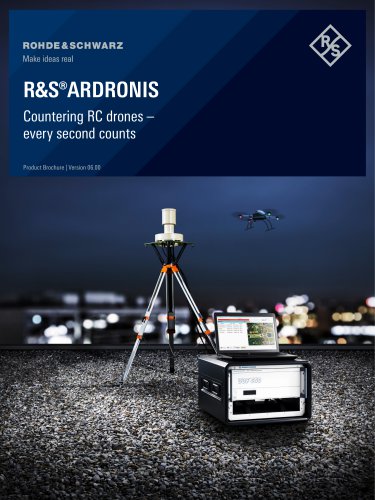 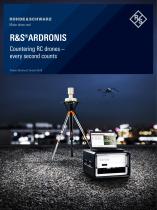 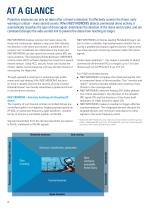 AT A GLANCE Protective measures can only be taken after a threat is detected. To effectively counter the threat, early warning is critical – every second counts. When R&S®ARDRONIS detects commercial drone activity, it automatically classifies the type of drone signal, determines the direction of the drone and its pilot, and (on command) disrupts the radio control link to prevent the drone from reaching its target. R&S®ARDRONIS displays concise information about the threat and continuously updates a map view that indicates the direction of the drone and its pilot. A predefined list of... 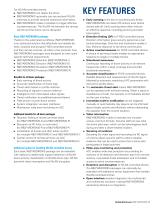 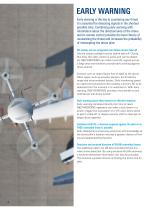 EARLY WARNING Early warning is the key to countering any threat. It is essential for detecting signals in the shortest possible time. Combining early warning with information about the direction/area of the drone and its remote control provides the best chance of neutralizing the threat and increases the probability of intercepting the drone pilot. RC activity can be recognized even before drones take off Drones require preflight checks before take-off. During this time, the radio control is active and can be detected. R&S®ARDRONIS can collect such RC signals across a large area and... 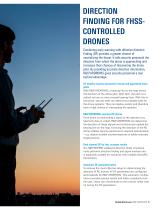 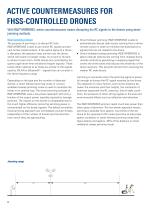 ACTIVE COUNTER EASURES FOR M FHSS-CONTROLLED DRONES With R&S®ARDRONIS, active countermeasures means disrupting the RC signals to the drones using smart jamming methods. Smart jamming concept The purpose of jamming is to disrupt RC links. R&S®ARDRONIS is able to jam drone RC signals and prevent further hostile actions. If the uplink signal of a drone is disrupted, the operator loses control over the drone, which will switch to failsafe mode, try to land or fly back to where it came from. FHSS drones are controlled by frequency agile short-time emissions (hopper signals). These bursts (often... 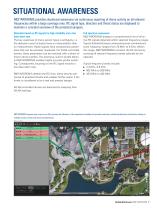 SITUATIONAL AWARENESS R&S®ARDRONIS provides situational awareness via continuous reporting of drone activity on all relevant frequencies within a large coverage area. RC signal type, direction and threat status are displayed to maintain a constant overview of the protected airspace. Detection based on RC signals for high reliability and a low false alarm rate The key weakness of many sensor types is ambiguity, i.e. the detection result is based more on interpretation than on measurement. Radio signals have characteristic parameters that can be precisely measured. For FHSS-controlled drones,... 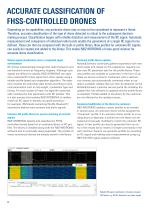 ACCURATE CLASSIFICATION OF FHSS-CONTROLLED DRONES Depending on its capabilities, any particular drone may or may not be considered to represent a threat. Therefore, accurate classification of the type of drone detected is critical to the subsequent decisionmaking process. Classification begins with reliable detection and measurement of the RC signal. Automatic measurement and comparison of individual radio bursts enable the parameters of a single RC signal to be defined. These can then be compared with the built-in profile library. New profiles for unknown RC signals can easily be created... 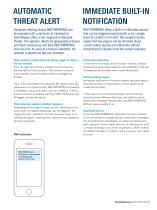 Automatic alerting means R&S®ARDRONIS can be operated with a minimum of training but nevertheless offers a fast response to detected threats. The operator selects an appropriate scenario and starts processing, and then R&S®ARDRONIS does the rest. As soon as a threat is detected, the operator is alerted via the user interface. When matched, profiles defined as threats trigger an alarm in the user interface First, the operator selects a scenario such as the predefined ISM 2.4 GHz scenario. This scenario contains many profiles. Some of these profiles are flagged as threats. Then, if the... 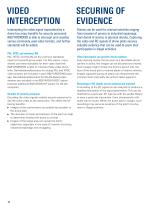 Intercepting the video signal transmitted by a drone has many benefits for security personnel. R&S®ARDRONIS is able to intercept and visualize various commonly used video formats, and further standards will be added. PAL, NTSC and wireless LAN PAL, NTSC and WLAN are the common standards used for transmitting live video. For this reason, many drones use these standards for their video downlink. R&S®ARDRONIS is able to intercept these video downlinks. Demodulators/decoders for analog PAL and NTSC video streams are included in each R&S®ARDRONIS package. Demodulators/decoders for WLAN-based... 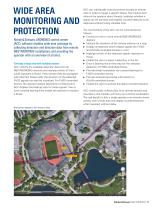 WIDE AREA MONITORING AND PROTECTION Rohde & Schwarz ARDRONIS control center (ACC) software enables wide area coverage by collecting detection and direction data from remote R&S®ARDRONIS installations and providing the operator with an overview of all sites. Covering a large area with multiple sensors ACC collects the available detection data from all R&S®ARDRONIS sensors and indicates which of them could represent a threat. If the remote sites are equipped with direction finders (DF), the direction of the detected FHSS signals can also be visualized. For FHSS-controlled drones, the operator...