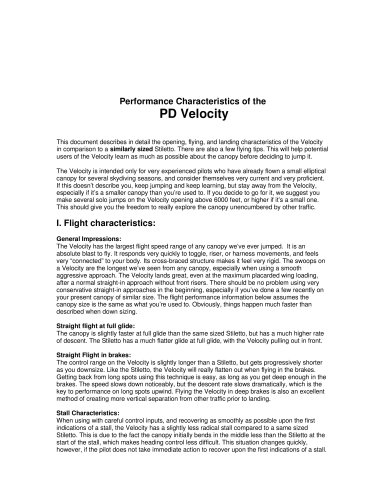 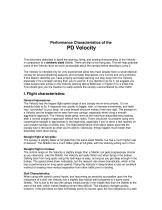 PD Velocity This document describes in detail the opening, flying, and landing characteristics of the Velocity in comparison to a similarly sized Stiletto. There are also a few flying tips. This will help potential users of the Velocity learn as much as possible about the canopy before deciding to jump it. The Velocity is intended only for very experienced pilots who have already flown a small elliptical canopy for several skydiving seasons, and consider themselves very current and very proficient. If this doesn’t describe you, keep jumping and keep learning, but stay away from the Velocity, especially if it’s a smaller canopy than you’re used to. If you decide to go for it, we suggest you make several solo jumps on the Velocity opening above 6000 feet, or higher if it’s a small one. This should give you the freedom to really explore the canopy unencumbered by other traffic. I. Flight characteristics: General Impressions: The Velocity has the largest flight speed range of any canopy we’ve ever jumped. It is an absolute blast to fly. It responds very quickly to toggle, riser, or harness movements, and feels very “connected” to your body. Its cross-braced structure makes it feel very rigid. The swoops on a Velocity are the longest we’ve seen from any canopy, especially when using a smooth aggressive approach. The Velocity lands great, even at the maximum placarded wing loading, after a normal straight-in approach without front risers. There should be no problem using very conservative straight-in approaches in the beginning, especially if you’ve done a few recently on your present canopy of similar size. The flight performance information below assumes the canopy size is the same as what you’re used to. Obviously, things happen much faster than described when down sizing. Straight flight at full glide: The canopy is slightly faster at full glide than the same sized Stiletto, but has a much higher rate of descent. The Stiletto has a much flatter glide at full glide, with the Velocity pulling out in front. Straight Flight in brakes: The control range on the Velocity is slightly longer than a Stiletto, but gets progressively shorter as you downsize. Like the Stiletto, the Velocity will really flatten out when flying in the brakes. Getting back from long spots using this technique is easy, as long as you get deep enough in the brakes. The speed slows down noticeably, but the descent rate slows dramatically, which is the key to performance on long spots upwind. Flying the Velocity in deep brakes is also an excellent method of creating more vertical separation from other traffic prior to landing. Stall Characteristics: When using with careful control inputs, and recovering as smoothly as possible upon the first indications of a stall, the Velocity has a slightly less radical stall compared to a same sized Stiletto. This is due to the fact the canopy initially bends in the middle less than the Stiletto at the start of the stall, which makes heading control less difficult. This situation changes quickly, however, if the pilot does not take immediate action to recover upon the first indica 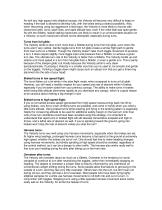 As with any high aspect ratio elliptical canopy, the Velocity will become very difficult to keep on heading if the stall is allowed to develop fully, with line twists being a distinct possibility. Also, when recovering using too aggressive a technique, the Velocity is more likely to recover with closed end cells, turns, slack lines, and rapid altitude loss, even if the initial stall was quite gentle. As with the Stiletto, radical stalling maneuvers are likely to result in an unrecoverable situation on a Velocity, so such maneuvers should not be attempted, especially during turns. Turns from... 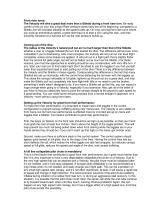 Front riser turns: The Velocity will dive a great deal more than a Stiletto during a front riser turn. Be really careful of this on your first jumps! Riser pressure starts fairly low at the beginning, compared to a Stiletto, but will increase steadily as the speed builds up. On long, carving front riser turns where you build up tremendous speed, a great technique is to start a turn using the riser, and then smoothly transition to a harness turn as the riser pressure builds up. Coming out of the dive: The radius of the Velocity’s natural pull out arc is much larger than that of the Stiletto,... 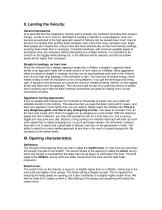 II. Landing the Velocity: General Impressions: (It is assumed that the prospective Velocity pilot is already very proficient at landing their present canopy, so this is not a “how-to” description!) Landing a Velocity is a real pleasure, once you become accustomed to the high approach speed! A Velocity can be slowed down much more at the end of a landing than similarly sized canopies, even more than many canopies much larger. Most people don’t expect this, and put their feet down prematurely on their first Velocity landings, touching down faster than is necessary. Consistent landings, with... 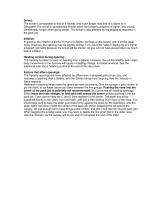 Snivel: The snivel is comparable to that of a Stiletto, and much longer than that of a Sabre or a Silhouette. The snivel is considerably shorter when the jumper’s airspeed is higher, and snivels considerably longer when going slower. The snivel is also affected by the degree of neatness in the pack job. Inflation: In general, the inflation is similar to that of a Stiletto, perhaps a little slower, with a similar peak force. However, the opening may be slightly quicker if you have the habit of deploying at a higher airspeed, (primarily because the snivel will be shorter, so you will not have... 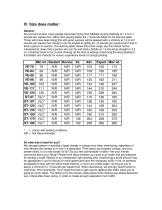