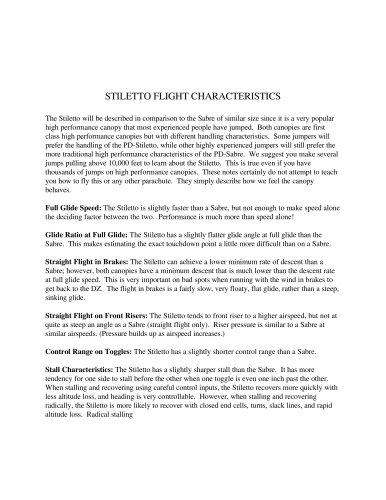 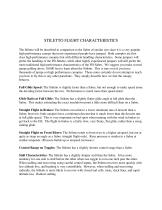 STILETTO FLIGHT CHARACTERISTICS The Stiletto will be described in comparison to the Sabre of similar size since it is a very popular high performance canopy that most experienced people have jumped. Both canopies are first class high performance canopies but with different handling characteristics. Some jumpers will prefer the handling of the PD-Stiletto, while other highly experienced jumpers will still prefer the more traditional high performance characteristics of the PD-Sabre. We suggest you make several jumps pulling above 10,000 feet to learn about the Stiletto. This is true even if you have thousands of jumps on high performance canopies. These notes certainly do not attempt to teach you how to fly this or any other parachute. They simply describe how we feel the canopy behaves. Full Glide Speed: The Stiletto is slightly faster than a Sabre, but not enough to make speed alone the deciding factor between the two. Performance is much more than speed alone! Glide Ratio at Full Glide: The Stiletto has a slightly flatter glide angle at full glide than the Sabre. This makes estimating the exact touchdown point a little more difficult than on a Sabre. Straight Flight in Brakes: The Stiletto can achieve a lower minimum rate of descent than a Sabre; however, both canopies have a minimum descent that is much lower than the descent rate at full glide speed. This is very important on bad spots when running with the wind in brakes to get back to the DZ. The flight in brakes is a fairly slow, very floaty, flat glide, rather than a steep, sinking glide. Straight Flight on Front Risers: The Stiletto tends to front riser to a higher airspeed, but not at quite as steep an angle as a Sabre (straight flight only). Riser pressure is similar to a Sabre at similar airspeeds. (Pressure builds up as airspeed increases.) Control Range on Toggles: The Stiletto has a slightly shorter control range than a Sabre. Stall Characteristics: The Stiletto has a slightly sharper stall than the Sabre. It has more tendency for one side to stall before the other when one toggle is even one inch past the other. When stalling and recovering using careful control inputs, the Stiletto recovers more quickly with less altitude loss, and heading is very controllable. However, when stalling and recovering radically, the Stiletto is more likely to recover with closed end cells, turns, slack lines, and rapid altitude loss. Radical stalling 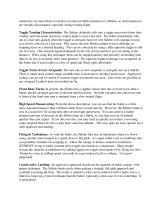 maneuvers are more likely to result in an unrecoverable situation on a Stiletto, so such maneuvers are strongly discouraged, especially during turning flight. Toggle Turning Characteristics: The Stiletto definitely rolls into a toggle turn much faster than a Sabre, and one needs much less control input to start a fast turn. The Sabre immediately rolls out of a fast turn quickly when the toggle is released; however, the Stiletto will continue to turn as it slowly rolls out of a fast turn. This causes the new Stiletto jumper to have difficulty in stopping turns on a desired heading. This can... 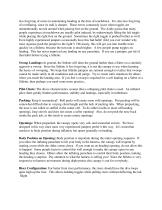 less forgiving of errors in maintaining heading at the time of touchdown. It is also less forgiving of overflaring, since its stall is sharper. These errors commonly occur when toggles are unintentionally moved around when placing feet on the ground. The Αside gusts≅ that many people experience at touchdown are usually pilot induced, by unknowingly lifting the left toggle while placing the right foot on the ground. Sometimes the right toggle is pushed further as well. Even highly experienced jumpers occasionally have this bad habit! (Did you ever wonder why most Αgusts≅ push the jumper to... 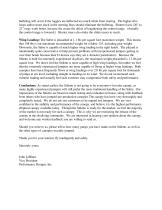 buffeting will occur if the toggles are deflected too much while front risering. The higher dive loops and/or more slack in the steering lines should eliminate the buffeting. Shorter risers (20" to 22") may work better, because the create the effect of lengthening the control range. (Actually the control range is lowered.) Shorter risers also make the slider easier to reach. Wing Loading: The Sabre is placarded at 1.1 lbs per square foot maximum weight. This means that 148 lbs is our maximum recommended weight for a Sabre 135, including gear weight. Obviously, the Sabre is capable of much...