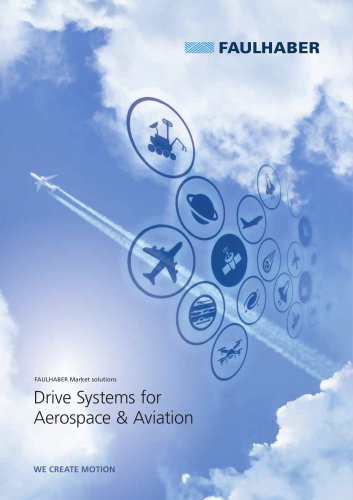 Light as air Equipment manufacturers for the Aerospace & Aviation markets rely heavily on innovative new materials, processes, and parts to master the ever increasing challenges of better aircraft fuel efﬁciency and robustness, all the while reducing costs but making no compromises when it comes to aircraft safety compliance and performance. Once we leave our atmosphere and venture out into outer space, these challenges increase exponentially. From small drive systems for aircraft cabin equipment, to specialized micro motion components for optical systems operating in the vast expanse of...

through an increase in marketable payload, FAULHABER understands that every gram counts on lift-off. However, light weight, high power and integrated features are not the only beneﬁts of FAULHABER Drive Systems. The motion system needs to survive in environments where extreme shock, vibration, and temperature changes are the norm and most importantly, given these harsh conditions to function reliably every time. Further applications of Aerospace & Aviation with FAULHABER Drive Systems Aircraft instrumentation ECS / Environmental control systems Drones and UAVs Flight recorders Cabin...

Aircraft cabin equipment FAULHABER Drive Solution Drive System I For every aircraft cabin equipment components the most important requirement is reliability. Nothing must fail or break during a ﬂight. And, of course, this also means that the maintenance intervals should be as long as possible. Weight is the second most important requirement. Every kilo increases fuel consumption, which is why airlines demand equipment that weighs as little as possible. Convenient seat adjustment all the way to the „lie-ﬂat“ position is achieved by lightweight and high-performance FAULHABER Drive Systems. Ø...

FAULHABER Drive Solution First proven successfully in private and business jets, motorized cabin equipment has been adapted for use in ﬁrst and then later in business class. Tables and holders for tablet computers are raised and lowered at the push of a button, and window blind systems are automated. The individual FAULHABER drive components for these applications are optimally matched to one another, work perfectly together and thus achieve a very high level of efﬁciency. Premium economy class, which is now offered more and more frequently, is likely to be next to adopt a number of these...

Camera gimbal for drones FAULHABER Drive Solution Drive System I Photographic devices rely on additional stabilization especially in small drones or UAVs as they provide little automatic damping due to their low permanent weight. Here, a gimbal-mounted, gyro-stabilized mounting platform is a perfect solution. However, weight is an issue, simply because the mini aeroplane or reconnaissance drone still has to be able to take off. Leightweight and powerful FAULHABER stepper motors with adapted transmissions provide the perfect solution for easy, reliable gyro-stabilization. High torque density...

Amphibious aircraft Be it on land, on water or in the air, the Flywhale moves safely and reliably in all three elements. And more than that: It is a special aeronautical pleasure with which to explore the world from above in this amphibious aircraft made from super-light ﬁbre composite material. Innovative drive technology from FAULHABER is also put inside these fascinating seaplanes and play an important part in lowering and raising the nose landing gear to safely land the aircraft on solid ground. FAULHABER Drive Solution Drive System I Ø 32 mm graphite brush motor with metal gearhead and...

Sensing satellite In order to research the inﬂuence of the Earth‘s magnetosphere on our modern world, NASA has sent four measurement probes into space for a multi-annual mission. Each of the satellites contains four stepper gearmotor units provided by FAULHABER which withstand the harsh space conditions. They are responsible for winding and unwinding the actual measurement cable. FAULHABER Drive Solution Drive System I Ø 22 mm 2-phase stepper motor with metal gearhead Long lifetime under extremely harsh environments, including extremely low temperatures and high vacuum Resistance to cosmic...

Comet probe „Rosetta Mission“ At the end of May 2014, the Rosetta space probe swung into an orbit around the comet 67P/Churyumov Gerasimenko in order to, after more closely approaching it in August, map its surface and thus prepare for the landing of Philae. On 12th November 2014, this ballistic lander, weighing 100 kg, touched down on the comet and began experiments intended to provide information about its composition. This lander has 14 FAULHABER drive systems which deﬁed the harsh conditions of the 10 year long journey through the vacuum and incredibly low temperatures of space, in...

Mars Rover 2020 is the year of the next Rover mission to Mars. The main payload of the Russian Proton rocket: the ExoMars Rover, developed by the European and Russian Space Agencies (ESA & Roskosmos). The plan is for the vehicle to be equipped with nine measuring instruments. Including one that will be mounted on a two-meter mast on the rover. „The Panoramic Camera“, which was developed by Mullard Space Science Laboratory (MSSL-UCL) in collaboration with OHB (Munich), DLR (Berlin) and TAS-CH (Zurich), will take stereo images of the planet. The so-called PanCam features two rotating ﬁlter...